That smile looks good on you...

I like to look my best, and I figure that when I'm laughing, it's all good. So, today, I'm going to give away laughter.....how about you?
Pattie Wilkinson Pattie Wilkinson at 10:20 AM No comments:

Pattiewack on You Tube! I'm on YouTube!! Can you believe it? I did not even know it until somebody told me. How crazy is that?
I followed the links from the YouTube site, and found out that Paul Gambino, author of Scrap City, has the video on his site, also. That makes sense, because the video is from a KOTV Channel 6 segment I did on CBS for the Six In The Morning Show, where I talked about Paul's new book, and demonstrated the Art Bra Scrapbook and other projects that I designed in the book.

Oh, and I told a BIG SECRET to the whole world that day on national television.

You'll have to watch the video (just click on the image above to load the video) to find out what my big announcement was. Then go out and make your very own scrapbook!
Pattie Wilkinson Pattie Wilkinson at 6:50 PM No comments:

These tools aren't Vanilla Ice, baby... they're Crystal Ice. And they are mine! I am crazy excited today, because my Pattie Wack Pom Pom and Tassel Tools have hit the streets. We have been working on these cherry products for a year with Coats and Clark, so it's so cool to see them reviewed in the latest Creative Knitting magazine for July 2007. I totally flipped when I saw the latest Teen Vogue magazine that I picked up at Barnes & Noble yesterday. There was a crafty article in there that reminded me of this cute fashion project I did a few years ago. Is this not sweet? The cute model chicky is Denise, and she is a great friend. Her ankle length shift is embellished with wordly places, cut from white fabric that I ironed to fusible web, and simply ironed onto the dress. Way easy!

Well, the Henry Holland style in the Teen Vogue is the same sort of look, with a different technnique. If you go to the Teen Vogue DIY page, you can see how they did the letters with jewels glued on, using stencils as a guide. I just love, love, love the huge jewels! Now I'm going to have to find my bin of giant acrylic jewels and make myself a shirt.
Pattie Wilkinson Pattie Wilkinson at 1:30 PM 5 comments: Oh my GOSH! When Santa Paula Times reporter, Peggy Kelly asked me for an interview, I had no idea that she would write such a great story. Although we DID have a giggle-fest and talked like old friends for two hours, about all the crazy, crafty stuff I've done. I love how she really got to know me, and truly captured my love for crafts. Woweeee. Front page, baybeeeeeeee. Wooohoooo!

(By the way, if you want to actually READ the copy, click on the photo, and you'll get an up close and personal look.)

Or, go to the Santa Paula Times
page to see the article and all the other things that are happening in our town. Thanks, Peggy!
Pattie Wilkinson Pattie Wilkinson at 3:47 PM No comments: Yummmmy, juicy, fun, tasty and easy! Grab a carving knife, a watermelon, and get crafty. Just think of the squeals of delight when you whip this out at the next party. I cheated, and found some sticky stencils to smack onto the front of the watermelon, carved out the daisy design, ripped it off, and wow! Wacky, but useful for holding flowers, or to put melon balls into. Try it!, I dare you.
Pattie Wilkinson Pattie Wilkinson at 11:38 AM No comments: If you've been hanging around me very long, you know about the things I love most. Let's see, there's spray paint, there's tassels and pompoms, and there's BOXES! These are some that I made with the new 123D Papercrafting tools that I helped design for EK Success. And guess what? The new tools are in Michael's Stores right now, as I type! I am soooo excited about this. The new tools are supremely perfect for papercrafting your brains out. So, get ready, because I'm going to be designing boxes galore. Oh, and of course they will have to have spray paint, tassels, and pompoms on them. Too fun!
Pattie Wilkinson Pattie Wilkinson at 8:51 AM No comments:

See You In The Funny Papers Blondie and Dagwood can go with me to the grocery store now, with my cute comic strip bag, and newspaper beads, baby! All you need to do is laminate the newspaper, then sew up the sides, and add a closure like I did. The barrel beads are triangles of newspaper rolled onto a skinny straw, glued at the end, and then strung together with beads on an elastic thread. Fast, fun, and cheap!
Pattie Wilkinson Pattie Wilkinson at 5:24 PM No comments: The Big Dog Parade in Santa Barbara today was so much fun. Puppies, people and pooches were everywhere! The itty bitty dogs are my favorite, and the costumes were amazing. Talk about creative! We were sitting on the curb, giggling and sipping our coffees, when it occurred to me how much work went into the preparation, and how patient the doggies must be.
Pattie Wilkinson Pattie Wilkinson at 10:06 PM No comments: 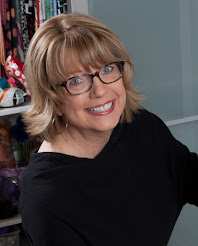 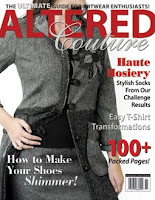